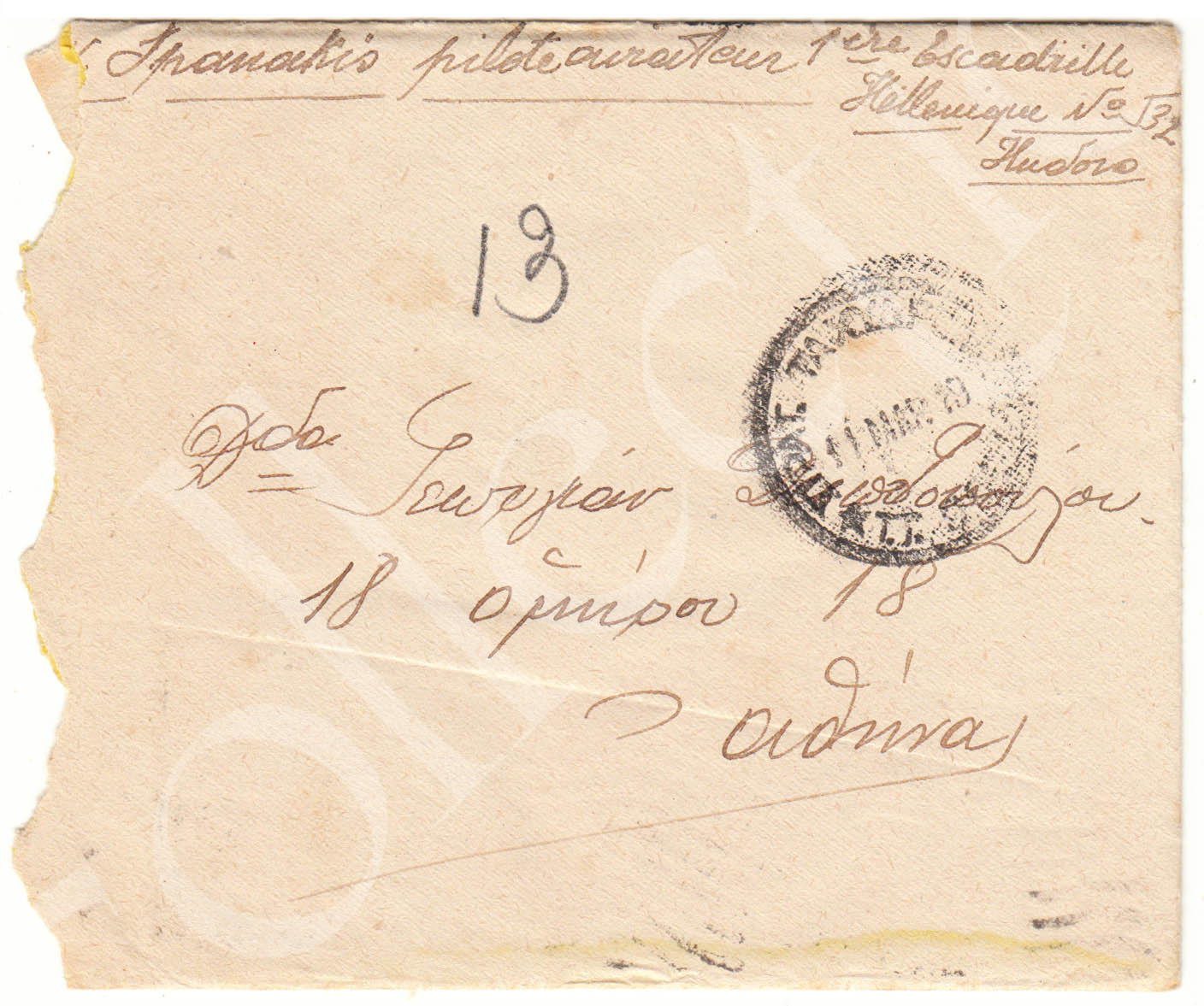 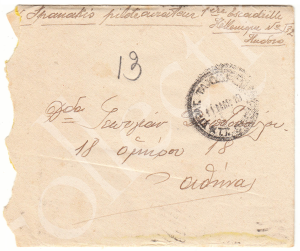 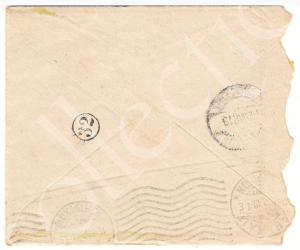 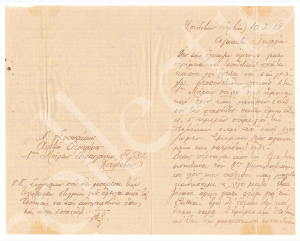 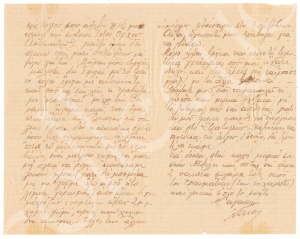 Cover from a warrant officer pilot aviator of the 1st Hellenic Squadron № 532 with enclosed letter addressed to Athens, Greece. Sender ms details in French: ‘N. Spanakis, Pilote aviateur 1ère Escadrille Hellénique № 532, Hudovo’ [Udovo/Serbia, today North Macedonia].
Enclosed letter, dated 10 March 1919, includes account on the hard weather conditions and the adventurous going encountered on the way to his unit stationed at the former German airfield of Udovo/Serbia: “Until Doirani we came well but on the edge of the ruined city (because it is not inhabited anymore) where the lake was flooded, the car fell in water deep one meter with no possibility to move. So we sat inside (because we could not go out as the lake was around us) from 6pm until next day at 2pm with no bread, in the cold, and a thousand more [problems].”
Addressee is Miss Georgia Despotopoulou, known along with her two sisters Nefeli and Ioanna for having kept correspondence with Greek enlisted men in all fronts from 1912 (Balkan Wars) to 1923 (shortly after the expedition to Turkey).
[The large “13” handwritten number on cover’s front side indicates addressee’s recorded incoming serial number, placed in arithmetical progression on each new letter received and filed for reference as each letter was always answered later.]
Postmarked in transit with ΣΤΡΑΤ. ΤΑΧΥΔΡΟΜΕΙΑ 11 ΜΑΡ. 19 Τ.Τ. 900 [(Greek) Army Post Office 900, 11.3.1919], assigned to the Greek Army General HQ at Thessaloniki, Greece.
Backstamped upon arrival at final destination with ΑΘΗΝΑΙ 14. ΜΑΡ. 19 ΚΕΝΤΡΙΚΟΝ ΣΤΡ. [Athens Central Military PO, 14 March 1919, JC] postmark and mc ΑΘΗΝΑΙ 14. ΜΑΡ. 19 ΚΕΝΤΡΙΚΟΝ [Athens civil Central PO, 28 November 1918, JC].
[The 1st Reconnaissance and Bomber Squadron No. 532 was formed at Gorgopi/Kilkis in Northern Greece on 12 October 1917. After the capture of the German-Bulgarian military camp at Udovo Serbia (29/09/18 JC), the Greek unit moved there and operated from the former grass airfield until May 1919, when it was redeployed in Drama, Greece.]
All dates in Julian Calendar.
Item condition: Good; opened roughly. Interesting item though; see scans.

LOCATION
Greece
SHIPPING
ask for:
certificate opinion
or Contact us about this item
Seller sobonegro